Sintana holds a carried interest in the PEL 82 license (Blocks 2112B/2212A) which is located offshore in the Walvis Basin area known as the North West Shelf, one of the most prolific gas provinces in the world.

Oil was recovered from the Wingat-1 well drilled by HRT (now PetroRio) in 2013 that is located in the block. The Murombe-1 well, drilled in the same license as Wingat-1, intersected a world class mature oil-prone source in the Aptian sequence.

The acquisition of a 3,440 square kilometers 3D seismic survey in PEL 82 resulted in the delineation of a number of significant prospects consisting of Lower Cretaceous submarine fans that are stratigraphically trapped.

Recent drilling in the Namibian offshore has proven the presence of an Aptian Type II source rock with >3% Total Organic Carbon as intersected in the Murombe-1 and Wingat-1 wells in the Walvis Basin. 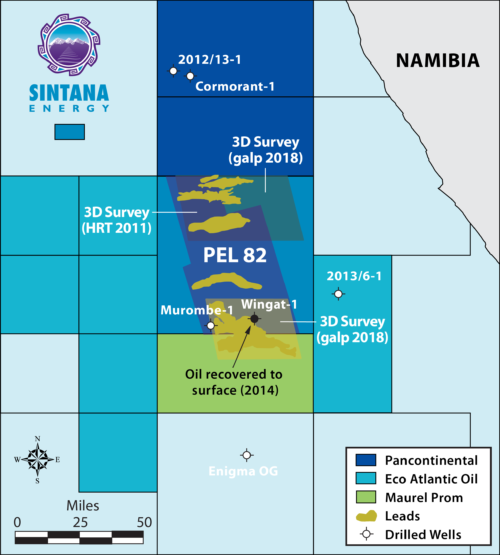