Sintana holds a carried interest in the PEL 83 license (Blocks 2812A/2814B) which is located in the northern Orange sub-basin approximately 150 km off the south-west coast of Namibia offshore.

The Barremian Aptian source rock (Kudu shale) is matured and believed to be within the current oil mature window across PEL 83. Prospectivity studies reveal a high hydrocarbon potential for the block, Over 400 square meters of structural closure and an estimated 200 meters of average gross reservoir thickness.

Adjacent to the west is the Kudu gas field, discovered in 1974 with Kudu-1 and is delineated by seven subsequent wells. In the first quarter of 2022, the Company purchased the semi-submersible drilling rig West Leo from Aquadrill LLC for use in Kudu for a gas-to-power project.

Adjacent to the south at PEL 39 Shell reported In early 2022 that the Graff-1 well discovered light-oil in two reservoir intervals, proving the oil-prone petroleum system in the Namibian portion of the Orange Basin. Graff-2 was spudded shortly after to appraise a significant resource (250-300 million bbls). The pre-drill resource was reported to be in excess of 1 billion bbls, more recent reports suggest the resource could be more than 2 billion bbls. Graff-1 is located less than 75km from the southern boundary of PEL 83.

* Effective Interest – On March 9th 2022, the Company completed the acquisition of 49% of Inter Oil (Pty) Ltd. resulting in an effective interest to Sintana Energy in PEL 83 of 5% carried interest. 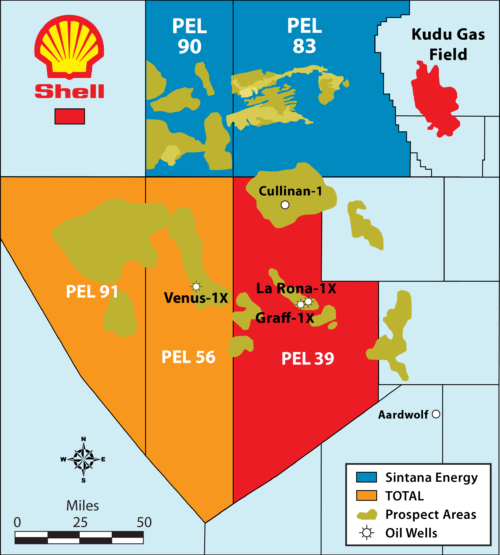